The names are officially in for the men’s and women’s U.S. Olympic Gymnastics teams after an intense finish to the 2012 Olympic trials this weekend. 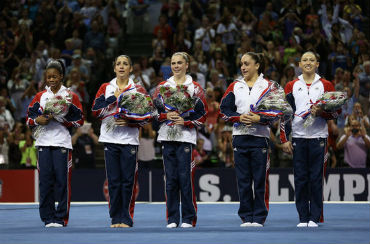 The women’s 2012 Summer Olympic Team will be led by 16-year-old Gabby Douglas, who won the 2012 U.S. Olympic Trials for women’s gymnastics, which concluded last night in San Jose.
Aly Raisman, Kyla Ross, McKayla Maroney and rookie phenom Jordyn Wieber will be joining Douglas in the 2012 Summer Olympics in London. Wieber, the 2011 world all-around champion, was undefeated in every major all-around competition she had been in so far until losing to Douglas in the 2012 U.S. Olympic Trials.
On a sad note, 22-year-old Nastia Liukin fell short of making the 2012 U.S. Women’s Olympic Gymnastics Team on Sunday after struggling through much of the 2012 U.S. Trials. The all-around champion in the 2008 Olympics in Beijing did, however receive two standing ovations for her comeback efforts and major contributions to the U.S. Olympic Gymnastics Team over the years. 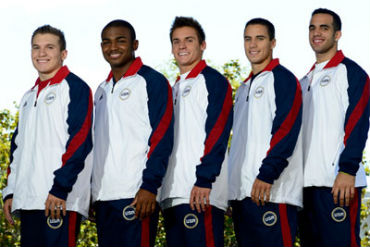 On the men’s side, there are many new but promising faces to be excited about.
Twenty-six-year-old Jonathan Horton, who took home two medals in the 2008 Summer Olympics in Beijing, took one of the final three spots of the 2012 U.S. Olympic Gymnastics Team, along with Jake Dalton, 20, and breakout star Sam Mikulak, 21.
As a freshman at the University of Michigan, Mikulak won the NCAA men’s all-around title in 2011 and he has done nothing but impress during the 2012 U.S. Olympic Trials despite suffering an ankle injury early on.
The other two members of the men’s 2012 U.S. Olympic Team are Danell Leyva and reigning national champion John Orozco who had automatically qualified for the team after the trials on Saturday night. They complete what many are calling the deepest U.S. Men’s U.S. Gymnastics squad in recent memory. Chris Brooks, Alex Naddour and Steven Legendre were also named as alternates for the team.
Things are looking very good for the U.S. Gymnastics Teams as they head into the 2012 Summer Olympics in London, England. Both team (men’s and women’s) are stacked with young, superb talent and hopefully, just enough veteran leadership to get it done this year.
The gymnastics competitions for the 2012 Summer Olympics in London begin on July 28 with men’s qualifications starting at 6 am EST (11 am London time).