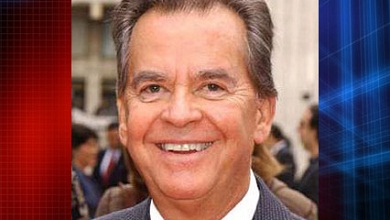 Dick Clark, legendary television host and producer, has died of what media outlets are calling a “Massive Heart Attack”.
The much-loved TV icon was always known for his indomitable spirit and energy, hosting such television events as “American Bandstand and “New Year’s Rockin’ Eve”, even into his later years.
In 2004, Clark suffered a massive stroke, which forced him to give up his hosting duties on “New Year’s Rockin’ Eve”.
According to multiple sources, Clark died in St. John’s Hospital in Los Angeles after suffering a heart attack following a routine surgery. Some details regarding his death remain unclear.
Log in for free to access our Members blog and watch classic Dick Clark videos