Facebook (NASDAQ:FB) users just got access to over 400 streaming video channels, thanks to FreeCast’s Rabbit TV Lite app. The app, which runs inside Facebook, aggregates free videos from all over the web and organizes them into channels. Users can’t watch premium shows like Game of Thrones, but there are still plenty of other shows, movies, and live channels to enjoy. 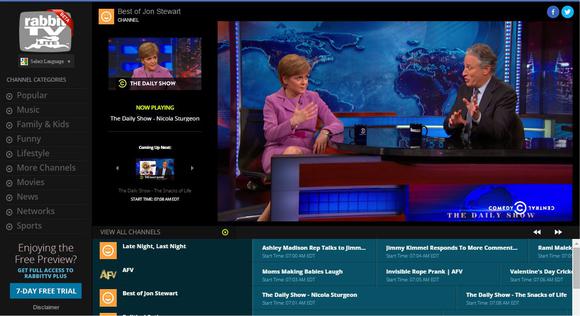 For Facebook, this an interesting approach which bypasses content licenses by simply pulling videos from web-based sources. Rabbit TV Plus, the premium version of the service which costs $10 per year, lets subscribers access over a hundred more channels and over 50,000 radio stations. FreeCast previously sold a USB stick which launches the same service on PCs, which it claims has reached over 4 million users. The growth of Rabbit TV won’t matter to Facebook financially, but it could help the social network keep users within its blue-and-white walls for longer periods of time.
Facebook’s future in video
To understand how Rabbit TV indirectly complements Facebook’s current strategies, we should discuss how much video matters to the social network. In 2013, its photo-sharing network Instagram introduced 15-second videos, paving the way for video ads to arrive a year later. In late 2013, Facebook introduced silent autoplay in-feed videos, which were warmly received by marketers.
Earlier this year, the company started letting users embed its hosted videos on third-party sites to challenge Google‘s (NASDAQ:GOOG) (NASDAQ:GOOGL) YouTube. It subsequently imitated YouTube’s strategy by sharing ad revenues with select content creators. In July, Facebook added a Periscope-like live streaming feature in its new Mentions app for celebrity users.

These efforts could help Facebook deliver two-thirds as many video views this year as YouTube, according to research firm Ampere Analysis. Ampere’s survey found that out of 10,000 respondents in Europe and North America, 15% had watched videos on Facebook over the past month — nearly 17% of those viewers hadn’t watched anything on YouTube during that time.
It’s all about ecosystem growth
Facebook’s investments in video have two main purposes — to generate ad revenues and to keep users on its site for longer periods of time. That’s why Facebook is so keen on hosting news publications’ stories directly on its site, rather than letting users leave through shared external links.
The longer Facebook keeps users within its walls, the more ads it can display, the more data it can mine, and the wider its defensive moat against Google becomes. According to site tracker Alexa, the average Facebook visitor now spends over 21 minutes on the site daily, compared to nearly 18 minutes for the average YouTube visitor. That gap could easily widen as Facebook expands its walled garden.
That’s why FreeCast just did Facebook a big favor with its Rabbit TV app. The more users start using the app as an Internet TV, the more time they’ll likely spend on the site. Facebook’s average audience is also getting older. According to the Pew Research Center, 56% of Internet users over the age of 65 used Facebook last year, compared to 45% in 2013 and 35% in 2012. All-in-one video aggregating solutions like Rabbit might appeal to that audience.
The problem with Rabbit TV
However, the big problem with FreeCast’s Rabbit TV is that it relies completely on aggregating videos from other sites. This means that if it gets more popular, sources like YouTube and major TV networks could start requesting licensing fees. If FreeCast refuses, they could simply cut Rabbit TV off. The Supreme Court ruling against Aereo, a streaming service which lets users watch local TV channels on mobile devices, also doesn’t bode well for Rabbit’s long-term future.
However, Rabbit TV’s ability to reach a few million users before launching its Facebook app should give the social network something to think about. If Facebook launches a full streaming video network within its site, plenty of networks and content providers would likely be interested. If it integrates that network into its mobile app as well, it could expand its video platform into a full-fledged YouTube rival.

Warren Buffett: This new technology is a “real threat”
At the recent Berkshire Hathaway annual meeting, Warren Buffett admitted this emerging technology is threatening his biggest cash-cow. Buffett’s fear can be your gain. Only a few investors are embracing this new market, which experts say will be worth over $2 trillion. Find out how you can cash in on this technology before the crowd catches on, by jumping onto one company that could get you the biggest piece of the action. Click here to access a free investor alert on the company we’re calling the brains behind the technology.

Read on The Motley Fool