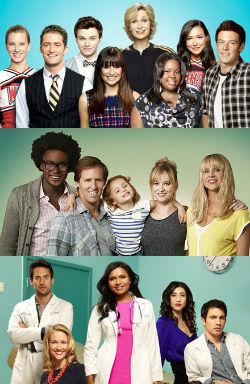 Fox ‘s fall lineup in 2011 was one of the strongest among the broadcast networks. With popular series like the time-tested ‘Glee’, the surprise hit ‘New Girl’, and the new Keifer Sutherland drama ‘Touch’, among others, the Fox executives had plenty to be celebrating about, especially with some of their top competitors struggling to satisfy an evolving television audience.
In 2012, Fox will be coming back strong with their already established hits along with some new flavors, including the newest season of ‘X Factor’, which will feature a certain Britney Spears as one of its newest hosts, and a new series by Kevin Bacon.
Fox has recently released the premiere dates for their Fall schedule, and FreeCast is here to give it to you.  Check out the breakdown below and let us know what you think:
All Times are EST