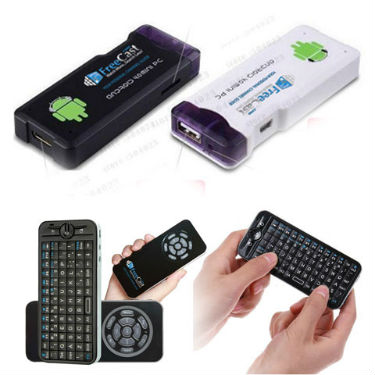 ORLANDO, Fla.–(BUSINESS WIRE)–Since its launch in January, freecast.com’s eMedia Guide has quickly established itself as the leading resource for consumers seeking a low-cost alternative to traditional cable and satellite services. The guide directs users to an unprecedented 5000+ content channels globally, including on-demand, live and high definition programming.
Beyond the popular web-based service, FreeCast also offers its guide via Facebook, mobile, tablet and wifi TV. Cord cutters and TV Everywhere advocates are quickly adopting FreeCast’s easy-to-use eMedia Guide, which updates over 1.5 million videos daily, eliminating the need for time-consuming searches.
The company’s business model is heavily based on the prediction that current cable/satellite infrastructures will inevitably be replaced with a unified broadband connection serving “a la carte TV”, or “pay-per-channel” premium programming. Recent industry controversies between DirecTV and Viacom, cable networks and Aereo, and DISH and AMC Networks over disproportionate revenues would point to the inevitable if there were simply an online aggregator of 10M+ subscribers to compete with cable and satellite distributors.
FreeCast is currently negotiating its retail sales distribution with notable direct response TV organizations and bundling with electronics manufacturers in order to reach this considerable amount of subscribers in the next 12-24 months. The company aspires to comparatively become as large as the top five cable/satellite companies, prompting negotiations with content networks like HBO and others for direct-to-consumer sales.
freecast.com also has immediate plans to release SkyBox, it’s combination micro-PC and wireless keyboard remote unit which will turn any TV into a wifi personal computer. This device, with Flash and HTML5 support for higher quality video, will likely thrive where set-top (app-based) boxes have struggled.
FreeCast is currently available at no cost, but will soon begin charging a nominal $10/year fee. Skybox is anticipated to retail for around $100 USD, less than the cost of one monthly average cable/satellite bill.
“SkyBox will enable split-screen entertainment with email, chat, and social media sites such as Facebook and others,” says FreeCast CEO William Mobley.
Mobley knows a few things about the Internet television marketplace, having launched MegaChannels.com in 1999, serving over 800,000 streaming videos per day when the average modem speed was only 56k-128K.