A new web TV app has users spending two to three times as much time on-site as Facebook, including Facebook’s own subscribers. 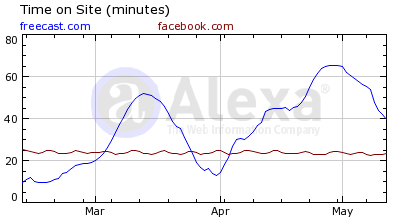 Given the financial controversy circling Facebook’s much-publicized $100 billion USD IPO, you have to ask yourself, “What’s the limit to all this?”
As everyone knows, Facebook has aggregated nearly a billion members over the last eight years, but its ability to provide a financial return to investors hinges on revenue generation; in this case, advertising. Today, just a few days after its IPO launch, Facebook is being challenged on their ability to penetrate the mobile advertising market.
Aside from communication (email, messaging, etc.) and social interaction (Facebook, Twitter), the most important key to consumer involvement online is entertainment. Much like iTunes is the de facto music aggregator and library, my latest exploration freecast.com seems to have captured the logic behind creating the ultimate online aggregation source for TV shows, movies, concerts, sports and events on a global level.
The concept behind FreeCast is simple – it’s a comprehensive guide to the web’s media content – and based on last week’s report from third-party traffic site Alexa.com, consumers seem to like it…a lot. The reports indicate that users are averaging 40-60+ minutes per visit on FreeCast, compared to Facebook’s average of about 22 minutes, something advertisers are sure to pick up on sooner rather than later.
It also doesn’t hurt that FreeCast is completely free for all users via their website, Facebook app, Android/iPhone mobile site, and just about anything with a compliant browser.
Is it finally time for TV commercials and infomercials to officially start paying more attention to the massive television audience on the web? Is freecast.com beginning to resemble the Comcast, Time-Warner, or DirecTV of the internet?
Since launching their beta in January of this year, FreeCast has not only been guiding consumers to over 7000 free channels of both on-demand and live programming, but it’s even helped users find live online coverage of such high-profile events as the Super Bowl, Grammys, Oscars, NBA All-Star Weekend, Kentucky Derby, and NBA Playoffs. If the predictions made in Jeff Peters’ May 23rd article “Social TV: When the Second Screen Becomes the First Screen” come true, the demand for this type of service is set to skyrocket in the coming year, which is good news for FreeCast.
With a product like this, which has already attracted tens of thousands of users in such a short period, it’s only a matter of time before those numbers start reaching astronomical levels. This growing popularity combined with the massive amount of on-site time for each user brings up the question: If Facebook can be worth $100 Billion based purely on ad revenue, how much will a highly interactive site like FreeCast be worth once it has millions of users?
Editor: Chad Marx
PublicWire.com

1 response on “If Facebook is Worth $100B, Could FreeCast Eventually Be Worth Twice That?”