A Park Associates study found that, of the top eight reasons media consumers cancel OTT streaming services, half are content-related. The survey found that “I finished watching the shows I liked” ranked as the number two response. 26 percent of responders cited this answer. Furthermore, “finishing shows” fell 1 percent behind “need to cut household expenses,” the top response. This survey reveals just how much churn is an issue.

The industry refers to  “churn” as the act of viewers rapidly consuming all of the content they enjoy on a streaming service. Next, let their subscription expire and jump to the next service to repeat this process. By doing so, consumers minimize costs by only having one SVOD service at a time. Currently, NBC’s Peacock is the service with the highest churn. However, Tubi and Crackle’s free ad-supported content follows close behind.

Original content is a key component in fighting against churn. Netflix and Disney+ understand this, as 80% of their catalogs are exclusive to their platform. Plus, their wide release schedule provides regular additions of new media year-round. These factors help avoid churn and ensure their viewer bases remain hooked. 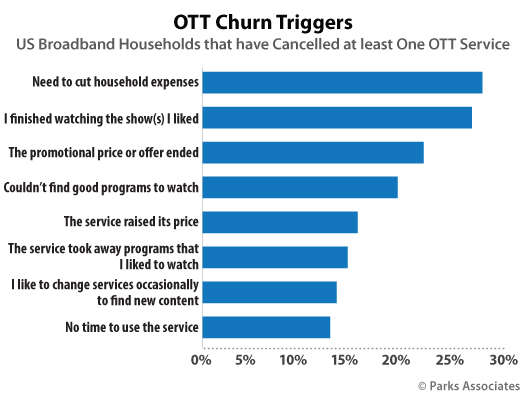 Source: Parks Associates via The Streamable

Here at FreeCast, we believe that super aggregation is the future of streaming. While each streaming service will continue to combat churn, it’s a consumer behavior that’s unlikely to stop anytime soon. Therefore, our pillars for providing unified discovery and billing are crucial in today’s world.

SelectTV’s recently announced MediaPay is one example of how we can allow consumers to easily manage their subscription services. Because of it, subscribers can easily alter which services they are keeping for that month and which ones they want a break from. Later, when the time comes to re-subscribe, you’re all set to flip the switch again.

The Streamable’s Steve Anderson reports more on the topic below. FreeCast is dedicated to providing updates regarding the streaming industry’s latest news. For more ahead-of-the-curve reporting, be sure to follow us on LinkedIn.

“The Parks Associates study found that there were several causes for churn in streaming video, ranging from the most frequently cited reason of ‘reducing household expenses’ to the least-cited issue — a lack of time to watch the service’s content. Available content played a role in nearly every other response left, however, illustrating the value of content in keeping subscribers.”