Tuesday night’s MLB All-Star game was over after the first inning when reigning AL MVP Justin Verlander surrendered five runs right off the bat (no pun intended) to catapult the National League to an 8-0 win. 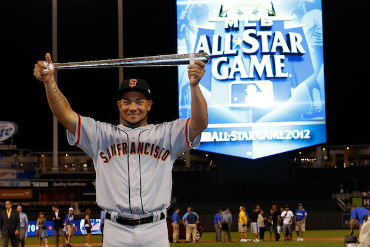 Most of the All-Star glory belonged to the San Francisco Giants cast that included Melky Cabrera, Pablo Sandoval and Matt Cain.
Cabrera, who played at Kauffman Stadium with the Royals last season, was named All-Star Game MVP after scoring the first run of the game and driving in the final two on a two-out home run in the fourth.
Cain started the game and ended up with the win, thanks in part to a bases-loaded triple from Sandoval in the first to give the NL a commanding lead almost immediately.
The entire National League pitching squad was phenomenal in the shutout victory, giving up just six hits to the American League. Cain was followed by an electric cast of hurlers that included Stephen Strasburg, Clayton Kershaw, Aroldis Chapman and R.A. Dickey. Phillies closer Jonathan Papelbon got the last out of the game to complete the shutout. Tony La Russa went to 11 different pitchers in the combined shutout. 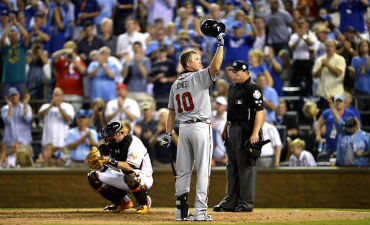 Another highlight of the 2012 MLB All-Star Game came when 19-year veteran Chipper Jones singled to right field in the final All-Star at-bat of his career. The crowd greeted him with a loud standing ovation during pregame introductions and again after the single.

New York Yankees second baseman Robinson Cano’s 2012 All-Star experience didn’t go quite as well. He was bombarded with boos in the home run derby as he failed to hit a single ball over the fence, while his family was also heckled in the stands by disorderly fans during the event. After his American League team got completely embarrassed in the All-Star Game, Cano probably couldn’t wait to get out of Kansas City.
Rookie superstar Mike Trout was solid in his first All-Star game appearance, going 1-for-1 with a walk, while the Washington Nationals’ Bryce Harper made a few rookie mistakes, getting caught in a run-down and losing a Mike Napoli pop fly in the Kansas City lights.
There really wasn’t much to say for the American League except that many players failed to show up and skipper Ron Washington has a hard time winning the most important games of the season. He has now lost in the World Series and the All-Star game the last two seasons.
Washington’s decision to start Verlander (9-5, 2.58 ERA) over the White Sox’s Chris Sale (10-2, 2.19 ERA) was a questionable one that backfired on him. After Verlander’s quick exit, Washington brought in Rangers closer Joe Nathan, followed by David Price in the third and Matt Harrison in the fourth (Also with the Rangers), who gave up three runs on four hits.
By the end of the game, the American League had registered a measly six hits, none of them timely in a shutout loss. The National League has now won the last three All-Star games and three of the last four World Series.