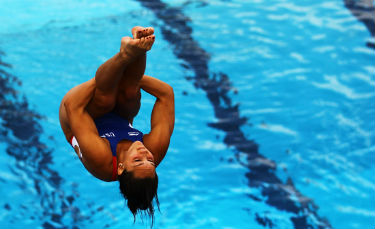 Get ready to watch some of the most high-flying, acrobatic athletes in the world as Olympic diving competitions get started on July 29 at 10am ET. You can watch Olympic diving live online for free beginning with the first competition, Women’s Synchronized 3-meter Springboard.
Leading the US Olympic Men’s Diving Team is four-time Olympian Troy Dumais, who is competing in the 3-meter synchro and the 3-meter springboard. He’ll be joined at the 2012 Olympics by David Boudia, Nick McCrory, Chris Colwill and Kristian Ipsen, who won the trials with Dumais as his partner. Watch Olympic Diving live online for free to find out if Dumais, referred to by some of his fellow teammates as ‘grandfather’, has enough left in the tank to earn a medal or two for the US Olympic Men’s Diving Team.

Kelci Bryant, Christina Loukas and Cassidy Krug, all heading to their second Olympics, will lead what looks like a very promising US Olympic Women’s Diving Team. Watch for first-time Olympians Brittany Viola and Abby Johnston to play major roles on the US Olympic Women’s Diving Team as well as live coverage of 2012 Olympic diving streams online for free.
The Chinese have been dominant in the Olympic diving competitions over the last decade, winning seven of eight gold medals in Beijing and six of eight in the 2004 Athens Olympics and their reign could continue this year. Be sure to watch Olympic diving live online for free to see if the US diving teams can put an end to their reign.
Visit FreeCast to watch 2012 Olympic Diving live online for free, as well as the many other events taking place at the London Olympics. Our Live Streaming Coverage Guide will direct you free live video content of every Olympic diving event.
Even if you don’t have a computer or television, you can still support the US Olympic Diving Teams by watching Olympic diving competitions live online for free through your mobile device.
Men’s 10m Platform Preview – Saturday, August 11: Matthew Mitchamof Australia shocked the Chinese in Beijing when he took home the gold medal in the 10m platform diving event, but the odds don’t appear to be in his favor this year considering he has been battling injuries coming in to London. Lin Yue and Qiu Bo are expected to put China back on the top of the medal podium. The Men’s 10m Platform Semifinal begins at 5am ET and the Final will be held the same day at 3:30pm ET.
Men’s 10m Platform Preview – Friday, August 10: The hands-down favorites in the Men’s 10m Platform are China’s Lin Yue and Qiu Bo. A few other names to watch when the preliminary round gets underway at 2pm ET are USA’s four-time Olympian, David Boudia and Great Britain’s Tom Daley.
Women’s 10m Platform Preview – Wednesday, August 8: The Preliminary Round for the Women’s 10m Platform diving competition will start at 2pm ET as a total of 26 divers are set to participate. China’s Chen Ruolin is the defending Olympic gold medalist and looks to be the favorite once again at the London Games. Hu Yadan, also of China will likely serve as her toughest competition, while Australia’s Melissa Wu and Brittany Broben are also podium contenders. Representing the US in the event are Katie Bell and Brittany Viola, who is the daughter of 1988 Cy Young Award winner, Frank Viola.
Men’s 3m Springboard Preview – Tuesday, August 7: The Men’s 3m Springboard Semifinal begins at 5am ET while the Final is set for 2pm ET start time. China’s He Chong and Qin Kai are the respective gold and silver medal favorites, which comes at no surprise considering the country’s dominant history in the event. Other names to watch for on Tuesday are USA’s Chris Colwill and four-time Olympian Troy Dumais, Canada’s Alexandre Despatie and Germany’s Patrick Hausding.

Women’s 3m Springboard Preview – Saturday, August 4: The US’ Christina Loukas and Cassidy Krug both advanced to the semifinalwith solid performances on Friday morning. Look for Loukas to make a push for an Olympic medal when the semifinal gets going on Saturday at 9:30am ET. China’s Wu Minxia and He Zi remain the favorites for gold and silver, while Italy’s Tania Cagnotto is definitely capable of reaching the podium too.
Women’s 3m Springboard Preview – Friday, August 3: The Preliminary Round for Women’s 3m Springboard Diving begins at 9:30am ET and as expected, China is the gold medal favorite. Look for both of China’s divers, He Zi and Wu Minxia to steal the show in this one, with Russia’s Nadezda Bazhina and Anastasiia Pozdniakova also having a chance at reaching the podium. Kristina Loukas and Cassidy Krug will be representing the US in the event as they go on a quest for their country’s first Olympic medal in the Women’s 3m Synchronized Springboard since the 1988 Games.
Men’s Synchronized 3m Springboard Preview – Wednesday, August 1: In the Men’s Synchronized 3m Springboard Final, look for a stellar performance from China’s young duo of Luo Yutong and Qin Kai as they go for Olympic gold. Kai won the event in Beijing along with then teammate Wang Feng. However, Ukraine’s Oleksiy Prygorov/Illya Kvasha, the bronze medalists in Beijing and Mexico’s Yahel Castillo/Julian Sanchez Gallegos could make a run at the podium as well. For the US, watch out for four-time Olympian Troy Dumais and Kristian Ipsen, who will be going second when the event kicks off at 10am ET.

Olympic Diving
Men’s Preview: It’s more than likely that the Chinese will run away with the men’s diving competitions as they have in recent Olympics. Bo Qiu is the gold medal favorite in the platform event, though the home crowd will likely be cheering hard for Great Britain’s Tom Daley. The US’ David Boudia is another interesting name to watch in the diving competitions as he joins four-time Olympian Troy Dumais, who specializes in the springboard event. Also look out for Australia’s 24-year-old Matt Mitcham, who took home an Olympic gold medal in diving in Beijing after edging out China’s Zhou Lüxin.
Women’s Preview: The Chinese women’s diving team is expected to remain superior in this year’s Olympic Games behind springboard phenom Wu Minxia and 4-foot-8 platform specialist Chen Ruolin. Chen won the individual and synchro 10-meter golds in Beijing and is a clear gold medal favorite in London. Other women to look out for in the diving competitions are Tania Cagnotto of Italy and the US’ Brittany Viola, who is competing in her first Olympic Games. China won seven of eight gold medals overall in the 2008 Olympics and not much is expected to change this time around.