*UPDATE: As of December 8th, 2021, Google and Roku have struck a multi-year deal to allow YouTube apps on the Roku platform.*

With Q3 officially over, Roku has revealed that their number of active users and revenue has increased more than previously predicted. The digital media hardware company saw 1.3 million new active accounts, bringing their total user base up to 56.4 million. Subsequently, their revenue shot up to $583 million, an 82% YoY increase. Lastly, average revenue per user hit about $40, up from around $20 the previous year.

This news comes at a time of uncertainty in the streaming sphere, as Roku and YouTube are amidst a heated dispute. Following a lapsed contract, Roku sought to re-negotiate their terms to adapt for the ever-changing streaming landscape. However, when Google refused to budge, the two started throwing underhanded comments at each other. Insofar, the future looks bleak for any form of partnership rekindling between the two.

YouTube saw massive increases in ad revenue all throughout 2020, with monthly users exceeding 120 million between the original app and YouTube TV. Mobile devices contribute 52 percent of viewing time, while 23 percent coming from a connected television. Because of the rising number of CTV users, YouTube has introduced expansions to its advertising technology with Brand Extensions, making it easier for advertisers to reach audiences viewing on TVs. 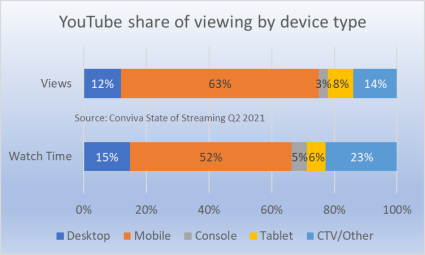 As a super aggregator, SelectTV believes in an agnostic approach to streaming, where all services are treated equally. App diving between platforms needs to be minimized if services want to maximize viewership and retain a positive sentiment from consumers. With YouTube’s ad revenue jumping 46% YoY and Roku’s main revenue source being ads, their conflict positions itself as a lose-lose for both parties.

Roku’s ad dependence comes from supply chain issues occurring due to Covid-19 and labor shortages. Most companies are feeling these woes, having to adapt their strategy to continue growing despite consumer’s pandemic spending habits. No longer are device hardware sales the defining factor of Roku. They also have the Roku Channel which provides free ad-supported streaming.

Despite this, Roku typically makes substantial earnings in fourth-quarter holiday rushes. Will the news of YouTubes unavailability impact consumer decisions to purchase the streaming product?

The closing date for the Roku-YouTube debacle is December 9th, 2021. After that, the YouTube app will no longer be available for download. Luckily, anyone who has downloaded the app prior to that date will still have access to it. It is unlikely, however, that developers will keep updating the app versions. Additionally, IMDb TV’s contract ends soon. If owner Amazon demands more user data and Roku declines, another popular service may disappear.

NScreenMedia’s Colin Dixon reports more on the topic below.

FreeCast is dedicated to providing updates regarding the streaming industry’s latest news and developments. For more ahead-of-the-curve reporting as well as updates on the YouTube-Roku debate, be sure to follow us on LinkedIn.

“Data shows how important YouTube has become to the connected TV industry in the US and abroad. With the clock ticking toward a December 9th deadline in the US for the Roku-YouTube dispute, the data suggests it could be a long, cold winter for both companies”