In it’s first 30 days, it’s apparent that Rabbit TV is definitely in the Internet TV race – so much so that it’s already surpassed the top 2 leading Internet TV sites in User Time on Site. 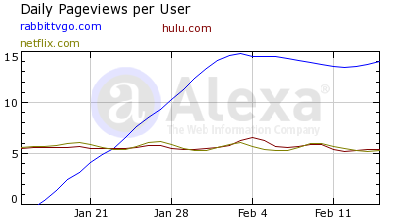 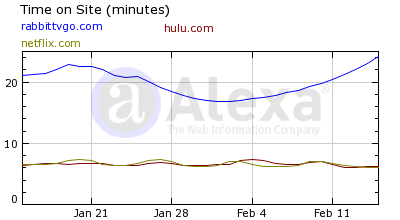 Daily Avg. Time on Site for Rabbit TV users as of 2/18 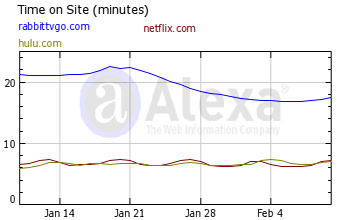 Newly released Rabbit TV is fast out of the gate, with no signs of slowing down anytime soon. The only question is – will others like Hulu and Netflix be able to keep pace as Rabbit TV adds millions of subscribers in the coming year?
Rabbit TV’s partnership with “As Seen on TV” giants Telebrands and their massive national retail network has Rabbit TV shipping out currently to major retailers around the country, including Walmart, Target, Bed Bath & Beyond, and Family/Dollar General to name a few.
Having only launched in January 2013, the company in the most recent days has shared that over 50% of its users are already spending more than an hour per visit, and sees this increasing dramatically as the company’s user-base compounds daily with new subscribers, says CEO William Mobley. Mobley goes on to say that the company’s eMedia guide, which manages and directs consumers to thousands of Internet TV content suppliers, is extremely popular with its subscribers, which reflects widespread acceptance of a shift whereby TV shows, movies and live events are, and will be delivered over the Internet for many years to come.

1 response on “Rabbit TV Blows by Netflix, Hulu and Other Internet TV Leaders”