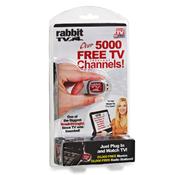 FreeCast Inc, the company behind the online television and movie network servicing Rabbit TV subscribers, has amassed the largest virtual content library and guide of freely available entertainment over the web. FreeCast also offers Rabbit TV subscribers a vast selection of newly released box-office hits, the latest cable episodes/series, live events, sports, and premium channels on a pay-per-view basis. The company is pursuing a true ‘a la carte’ select-and-pay offering for price-conscious consumers.
FreeCast’s collaboration with sales and marketing giant Telebrands Corp has given the product massive consumer exposure and is educating a new generation on what is becoming the future of digital entertainment. Rabbit TV has quickly populated the shelf space of major retailers nationwide, including Walmart, Target, Bed Bath & Beyond, Office Depot, Walgreens, CVS, Dollar General, Rite-Aid, and many others.
By aggregating and organizing content from thousands of online sources, including TV shows and movies from today and the last 50 years, Rabbit TV is able to give users an easy-to-use, universal access point for all of their web-based entertainment, providing both a time-saving and convenience factor that’s garnering an overwhelmingly positive response from consumers.
“Our subscribers are absolutely falling in love with Rabbit TV. All you have to do is take a look at our user time-online statistics, which are already competing with the likes of Hulu and Netflix,” reports William Mobley, FreeCast’s CEO.
The company gives credit for the growing consumer interest in Rabbit TV to a rapidly evolving entertainment landscape, fueled by growing cord-cutter, over-the-top (OTT), second screen, and mobile TV markets. This transformation is further evidenced by recent developments in the industry, including Cablevision CEO James Dolan’s admittance that television will ultimately shift to the Internet, as well as continuing fee disputes between networks and cable providers, the most recent conflict involving a stalemate between Time Warner Cable and CBS which left millions of Time Warner customers without CBS and Showtime programming.
“We’ve been watching this shift ever since we launched our first video portal back in 1999,” says Mobley. “Our goal right now is to pursue this with an open, agnostic ‘library-guide’ approach, with a focus on aggregating an audience based on the convenience factor. We want to be ready for whatever’s going to happen here, and we’re excited to see how it all plays out.”
FreeCast and Telebrands plan to announce in the coming weeks both substantial updates to their network offering and additional multi-device compatibility for Rabbit TV.
For more information: Company – freecast.com Product – RabbitTV.com Network – RabbitTVGo.com
Public Relations/Communications PublicWire ddonlin@publicwire.com
Click here to view this press release at SacBee.