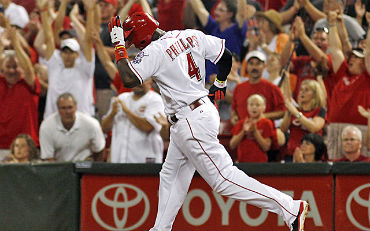 Things aren’t looking good for the San Francisco Giants right now after suffering a 9-0 loss to the Cincinnati Reds to go down 0-2 in the National League division series. Making things even worse is the fact that they now have to travel to the Great American Ballpark and play on the road for the rest of the series, which may not go past tonight.
With their backs against the wall, the Giants will try to fight their way to a win on Tuesday to extend the National League division series.
Thanks to MLB’s Postseason TV package, baseball fans can watch the Reds vs Giants live online, along with nearly every other 2012 MLB playoff game. All that is required to watch the 2012 MLB Postseason live online is a one-time fee of $4.95 for the Postseason TV package. After paying that one-time fee, just visit FreeCast and head to our Live Events page to watch the Reds vs Giants live online along with nearly every other MLB playoff game. Just click on the Reds vs Giants live stream link.
Taking the hill for Cincinnati on Tuesday will be 26-year-old Homer Bailey, who threw the 15th no-hitter in Reds history not even two weeks ago. Bailey will likely get a huge ovation from the Cincinnati crowd for that achievement as they look for him to close out the National League division series.
The Reds have not won a playoff game at home in 17 years, so Bailey’s Tuesday night start is more than a big deal. Watch the Reds vs Giants playoff game live online with FreeCast as Bailey tries to complete the three-game series sweep for Cincinnati.
Bailey will go against San Francisco’s Ryan Vogelsong when the Giants at Reds games streams live online. There’s a tremendous amount of pressure on the 35-year-old Vogelsong, who was 14-9 with a 3.37 ERA during the regular season. If he can come up big on Tuesday night, it could be just what the Giants need to get back in the National League division series. Be sure to watch the Giants vs Reds live online to see if Vogelsong can help San Francisco stay alive in the MLB postseason.
San Francisco will need its bats to come alive to have a chance against a Cincinnati lineup that includes Brandon Phillips, Drew Stubbs, Joey Votto and Jay Bruce. Key hitters on the Giants to watch out for are Pablo Sandoval, Hunter Pence and National League MVP candidate Buster Posey. Watch the Giants vs Reds live online to see if Posey and the rest of the San Francisco lineup will come alive in Game 2 of the series.
Reds manager Dusty Baker will also be returning to the Cincinnati dugout for the first time since September 12, which could ignite the team even more. He had been hospitalized for an irregular heartbeat and a mini-stroke while the team was on a road trip in Chicago.
Baseball fans will not want to miss out on watching the Giants at Reds live online as it could be the last game of this NL division series if Cincinnati prevails. To watch the Reds vs Giants MLB playoff game live online, just head over to FreeCast’s Live Events page. We’ll provide you with live stream links for all the big MLB playoff games so you can watch the Reds vs Giants and other great postseason matchups live online.