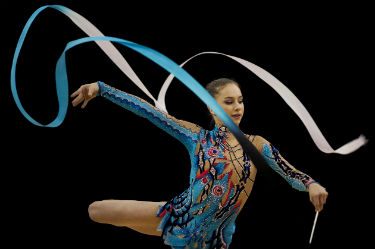 Rhythmic gymnastics at the 2012 Olympic Games in London begin on Thursday, August 9 at 7am ET and free live streaming coverage of the competitions in their entirety will be available to watch online.
All you have to do is visit FreeCast’s Live Olympics Coverage Guide to start watching Olympic Rhythmic Gymnastics right away.
Rhythmic gymnastics events at the Olympic Games include an individual all-around competition and a group competition.
Twenty-four athletes will compete in the individual all-around qualifying round, performing one exercise with a ball and another with a hoop on the first day, followed by separate routines with clubs and ribbons on the second day.

You can watch every moment of Olympic Rhythmic Gymnastics competitions live online for free, from the qualifying rounds through the finals. The ten highest-scoring gymnasts will then advance to the individual all-around final, where they will perform the same four exercises.
The group rhythmic gymnastics competition consists of 12 teams, with each one performing two routines. The first routine involves five balls, while the second requires teams to use three ribbons and two hoops. The eight teams with the highest scores in the qualifying will advance to the group final, which will take place two days later.
Watch Olympic Rhythmic Gymnastics live online for free to get a better understanding of the sport that only involves women. The first event at the London Olympics will be the qualifying for individual all-around, beginning at 7am ET on Thursday, August 9.
Over the years Russia has completely dominated this event, taking home the gold in both the individual all-around and group all-around competitions in three straight Olympic Games. Belarus and Ukraine have also fared well in rhythmic gymnastics at the Olympics and are among the podium favorites in the 2012 London Games. The US on the other hand, has never medaled in either of the rhythmic gymnastics competitions at the Olympics, so be sure to watch Olympic Rhythmic Gymnastics live online for free to see if they can finally earn a medal and potentially upset one of the more prominent nations in the event.
Some names to watch out for at the London Olympics include Belarus’ Melitina Staniouta and Lyubov Cherkashina, Ukraine’s Alina Maksymenko and Russia’s Yevgenia Kanayeva and Daria Dmitrieva. As the reigning Olympic gold medalist,  Kanayeva is the one to beat in the individual all-around competition. Find out if she has what it takes to repeat in London by watching Olympic Rhythmic Gymnastics live online for free.
Rhythmic Gymnastics Preview – Saturday, August 11: The Individual All-Around Final will be held throughout the day (four rotations), beginning at 8:30am ET. Russia is the nation to beat in this event and it shouldn’t surprise anyone if they earn the top two spots on the podium. Yevgenia Kanayeva and Daria Dmitrieva will try to bring the country even more medals to add to its already-impressive rhythmic gymnastics resume in the Olympics. Belarus and Ukraine generally have solid, medal-worthy competitors as well. The fourth rotation will start at 10:10am ET, with medals being handed out upon its conclusion.
Rhythmic Gymnastics Preview – Thursday, August 9: Look for Russia’s Yevgenia Kanayeva and Daria Dmitrieva to coast through the individual all-around qualifying as well as Belarus’ Lyubov Cherkashina and Ukraine’s Alina Maksymenko. Representing the US in the event is Julie Zetlin. The individual all-around qualifying starts at 7am ET. The qualifying for the group competition will get going at 9:50am ET and will stream live online.