Click Here to Watch the Chargers vs Saints Live Online 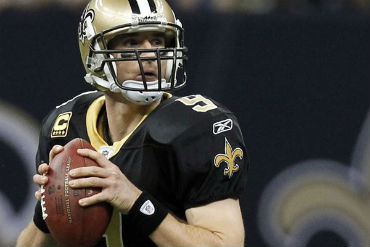 Sunday Night Football probably couldn’t come soon enough for Drew Brees and the New Orleans Saints, who are still looking for their first win of the 2012 NFL season. The stage will be set for them to get that first victory when they take on the San Diego Chargers in the Super Dome Sunday night at 8:20pm ET.
Fortunately, football fans can watch the Saints vs Chargers live online for free at FreeCast as Brees and New Orleans try to pump up the home crowd. When you arrive at FreeCast, follow the link to our Live Events page. We’ll provide you with a Live Streaming Coverage Guide which gives you access to NBC’s Sunday Night Football and several other live sporting events online for free.
Just click on the Sunday Night Football live stream link to watch New Orleans vs San Diego live online for free.
Drew Brees and the Saints passing game has looked strong as usual to start the season but New Orleans’ defense hasn’t fared so well. They come into Sunday Night’s football game against the Chargers ranked 24th in the NFL in passing defense and dead last against the run (186.8 yards/game). Their struggles could have a lot to do with the absence of middle linebacker and leader Jonathan Vilma and former defensive coordinator Gregg Williams. Watch the Saints vs Chargers live online with FreeCast to see if the New Orleans defense can right their wrongs on Sunday Night.
Brees will also look to make it 48 consecutive games with a touchdown pass, breaking Johnny Unitas’ NFL record that has stood since the 1960s. Brees tied that record against the Packers last week when he threw for 446 yards and three scores in a losing effort. Be sure to watch the Chargers vs Saints live online, absolutely free to see Brees set the NFL record for most consecutive games with at least one passing touchdown.
San Diego (3-1) are also capable of putting up big numbers through the air behind quarterback Phillip Rivers. When the Chargers take on the Saints on NBC’s Sunday Night Football, look for Rivers to try and hook up with tight end Antonio Gates and wide receiver Malcolm Floyd quite a bit. The Saints 32nd ranked run defense also gives running back Ryan Matthews perhaps his best chance to finally have a breakthrough performance for the Chargers. Watch the Chargers vs Saints online live with FreeCast as Rivers and Matthews try to take advantage of a lousy New Orleans defense.
Other players to watch out for when Sunday Night Football streams live online are the Saints’ Marques Colston, Darren Sproles and Jimmy Graham. Brees should look to go to these three early and often against San Diego. There should be lots of offense tonight so be sure to watch the Saints vs Chargers Sunday Night Football live online for free.
Just visit FreeCast’s Live Events page and click on the Sunday Night Football live stream link to start watching New Orleans vs San Diego live online at 8:20pmET. Don’t miss out on your last source of entertainment before you get back to your work week. Watch the Saints vs Chargers live online with FreeCast right when Sunday Night Football gets rolling.