Live coverage of Auckland Aces vs Sialkot Stallions begins Tuesday at 11:20am ET. 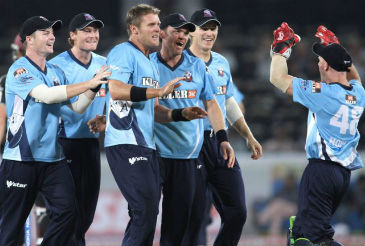 On Tuesday, October 9 the Sialkot Stallions will face off against the Auckland Aces in the first-ever Champions League Twenty20 game for a team from Pakistan.
Sialkot was all set to play in the CLT20 in the league’s first year back in 2008 before the Mumbai bomb explosion caused everything to be put on hold.
The Stallions finally have their chance to prove themselves in the CLT20 cricket tournament and fans can watch their first match against the Auckland Aces live online with the help of FreeCast.
That’s right. Just visit FreeCast to watch the Sialkot Stallions vs Auckland Aces live online for free, along with many other Champions League Twenty20 cricket matches when they begin streaming live online. Just visit our Live Events page and click on the Sialkot Stallions vs Auckland Aces live stream link. From there you’ll be able to start watching Sialkot vs Auckland live online, absolutely free.
The Auckland Aces don’t have much experience in the CLT20 either, appearing in the cricket tournament for just the second time. Last season, Auckland lost both of its qualifying matches and made an early exit from the Champions League. They arrived in South Africa roughly two weeks ago so they could get all the preparation they need this time around. Watch the Auckland Aces vs Sialkot Stallions live online for free as the Aces try to put together a stronger CLT20 campaign in 2012.
Players to watch out for when Sialkot vs Auckland streams live online at FreeCast include the Stallions’ Naved-ul-Hasan, Azhar Mahmood, Imran Nazir and team captain Shoaib Malik. On the Aces watch out for Gareth Hopkins and big-time bowler Michael Bates. Be sure to watch Sialkot vs Auckland live online for free to see which players play the biggest roles in their first Champions League T20 cricket match in 2012.
FreeCast is your destination for live streaming Champions League T20 cricket matches, including Auckland vs Sialkot on Tuesday morning at 11:20am ET. Just head over to our Live Events page to watch Sialkot vs Auckland live online and several other CLT20 cricket matches when they get underway throughout the week.
If you don’t have a computer, you can always watch Auckland vs Sialkot live online for free through your tablet or mobile device.