Click Here to Watch No. 8 Stanford at Washington Live Online

(Live streaming coverage of Washington vs Stanford may require authentication.) 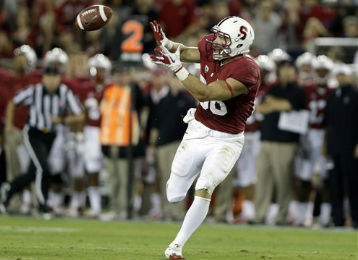 Fresh off their 21-14 win over No. 2 USC, the Stanford Cardinal travel to Seattle on Thursday night to take on the Washington Huskies at CenturyLink Field. The impressive win bumped the Cardinal up to No. 8 in the FBS rankings and they’ll look to continue to prove that they’re one of the best teams in college football when they face the 2-1 Huskies.
While the game will be airing tonight at 9pm ET on ESPN, college football fans can also watch Stanford at Washington live online for free with a little help from FreeCast. Just visit our Live Events page and click on the link for the Washington vs Stanford live stream to start watching the college football game as soon as it gets under way.
Stanford’s junior quarterback Josh Nunes has done a great job taking over the Cardinal offense after the departure of Andrew Luck, who was taken No. 1 overall by the Indianapolis Colts in the 2012 NFL Draft. He’s thrown for 615 yards and six touchdowns already this season to just three interceptions. Watch him lead the Cardinal offense onto the field when Stanford at Washington streams live online Thursday night.
The Cardinal’s biggest strength this season, however, has been the outstanding play of their defensive front, which leads the NCAA in fewest rushing yards allowed per game (41.7). Last week, Stanford’s defense surrendered just 280 yards of total offense to a USC team that’s supposed to have one of the best passing attacks in the country.
Stanford sacked Trojans quarterback Matt Barkley four times and didn’t allow a single touchdown pass in the game. Watch Stanford at Washington online live for free as the Cardinal defensive line makes things very difficult for Keith Price and the Huskies offensive, which is already banged up.
The Huskies struggled the last time they faced one of the nation’s top defenses in LSU. They lost to LSU 41-3 and managed just 183 yards of offense in the game. Only 26 of those yards came on the ground. Washington running back Bishop Sankey, who has rushed for 185 yards and three touchdowns on 44 attempts (4.7 yards/carry), should have a hard time finding any running room against Stanford’s stout defensive line. Watch the Huskies vs Cardinal live online, absolutely free to see if Sankey can be a factor.
Cardinal running back Stepfan Taylor, on the other hand, could have a huge day on the ground against a Washington defense that is allowing an average of 113.7 rushing yards per game. Taylor registered 27 carries for 153 yards and a touchdown against USC last weekend and has 338 rushing yards on the season. Watch Washington vs Stanford live online with FreeCast as Taylor looks to have another big day on the ground.
Be sure to watch Stanford at Washington live online, absolutely free as soon as the college football game gets going at 9pm ET. All you have to do to watch the Cardinal at Huskies online live is visit FreeCast’s Live Events page. From there, you’ll be able to watch this Pac-12 matchup online for free by clicking on the Washington vs Stanford live stream link.