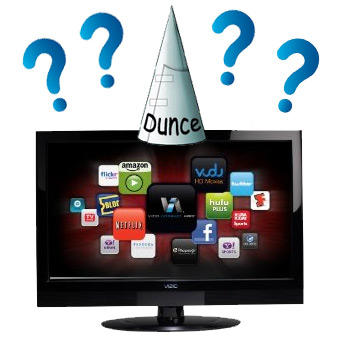 According to Neilsen, the average American spends approximately 35 hours per week watching video screens – that’s five hours per day, for the mathematically-challenged. Of those five hours, the vast majority of that time (about 4.6 hrs) is spent watching live TV, that is, the usual broadcast and cable programming we’ve all grown up with. The remainder is made up of DVR playback (24 mins), DVD playback (14 mins), and video games consoles (12 mins), with other forms of entertainment making up a negligible portion of the overall viewing stats.
Even though set-top boxes like Roku, Boxee, Apple TV and over-the-top services like Netflix, Vudu, and Hulu are making their way into more American households, they’re lightyears away from competing with live TV for a number of reasons, including a lack of content, lack of simplicity, and a major lack in live scheduled programs that Americans love.

TV is just so much simpler – you turn it on and something’s already playing. If you don’t like it, you change the channel. Repeat ad infinitum. No need to “decide” what you want to watch before you watch it. If only TVs could incorporate the Internet and popular services like Youtube and Netflix into their straightforward interface, they would be able to create the ultimate entertainment ecosystem. I would be so easy.
This is what manufacturers thought, and since then we’ve seen just about every manufacturer roll out its own version of the “Smart TV”. In theory, it seemed like the next wave of entertainment, but things didn’t quite pan out that way.
In this blog, we’ll go over why Smart TVs aren’t as smart as you may think.

The video below is what Google TV was going to be, or at the very least what it wanted to be. “TV meets Web, Web meets TV.” The concept was to fully integrate the internet with your TV – everything you love about TV plus a complete web browser, thousands of apps, all brought together with Google’s unrivaled ability to search and organize the web.
[iframe width=”97%” height=”480″ src=”http://www.youtube.com/embed/diTpeYoqAhc”]
Unfortunately, by the time production was underway, most of that went out the window, and instead we got a system with:

Nothing about the first incarnation of Google TV mirrored the simplicity and intuitiveness of the original concept. And it’s not like they were the only ones who missed the mark, other producers of Smart TVs had just as many (usually more) issues as Google and Samsung. What was supposed to be the next big thing in entertainment turned out to be a huge disappointment.

Why Buy the Cow When You Can Get the Milk for under $100?

While TV manufacturers spent their time and money trying to incorporate internet services and apps into an all-in-one entertainment system, more and more Americans began using over-the-top devices like Roku, Boxee, and Apple TV to access almost all of the same content without having to drop thousands of dollars on a totally new television.
Of course, these devices had many of the same shortcomings as smart TVs – difficult navigation, limited selection, etc – but they generally cost around $100, a much smaller financial risk than getting a smart TV. Another benefit was (and is) that these devices (specifically Apple TV and Roku) focused on making their systems as simple and digestible as possible (with the tradeoff being a slightly smaller selection).
Another key disparity between set-top boxes and smart TVs is the extended lifespan of a TV – these days we get new phones every two years, new computers every three, but TVs we keep for an average of about 7-8 years. What’s more, consumers almost always buy new sets for aesthetic reasons – screen size, thin designs, picture quality – with price also being a major factor. Very few people care about internet connectivity when buying a new TV.
Why would you commit to a Smart TV with an underdeveloped interface when the technology is likely to change drastically every year? It makes a lot more sense to spend $100 on a peripheral device that grants your current TV the same “smartness” with the flexibility to buy new devices as technology advances.

Looking to the Future

According to an NPD study, of the 25m US households who actually own smart TVs, less than half have ever actually connected it to the internet. The study predicts that 43m smart TVs will be shipped in 2012, with that number increasing to 90 million by 2016. But with so many set-top boxes and gaming consoles providing all the same services and apps, these predictions seem optimistic at best. Given the trends, it seems more likely that smart TVs will be overshadowed by more adaptable over-the-top devices.
Although Smart TVs may eventually get their act together and produce something close to what they were expected to be, they very well may have missed their chance at becoming a dominant force in American living rooms.