Live streaming coverage of the US Open is begins Monday, August 27 at 1pm ET 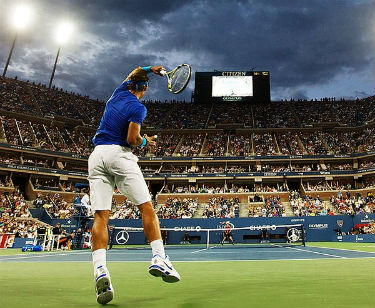 With the start of the US Open right around the corner, tennis’ best players are preparing to battle it out on the court for supremacy. The first round of the 2012 US Open at Arthur Ashe Stadium in New York begins Monday, August 27 at 1pm ET and all the exciting tennis action will be streaming live online.
With the help of FreeCast, you’ll be able to watch the 2012 US Open live online for free from August 27 – September 9 when the finals are held.
All you have to do is visit Our Live Events page and we’ll help get you set up to watch free live streaming coverage of US Open tennis from start to finish.
Andy Murray will be looking to win his first major when the 2012 US Open begins after defeating Roger Federer to claim a gold medal at the Olympic Games in London. The level of competition however, is very high as Roger Federer, Juan Martin del Potro, John Isner, Joe-Wilfried Tsonga and 2011 US Open champion Novak Djokovic all seem to have a good shot at taking this thing. Watch the 2012 US Open live stream online to see who will prevail.
On the women’s side watch out for top-seeded Victoria Azarenka, Caroline Wozniacki, No. 2-ranked Agnieszka Radwanska, Maria Sharapova, Angelique Kerber and Venus and Serena Williams.
Serena is expected to at least make it to the US Open Final after winning the 2012 Wimbledon singles title as well as a doubles and singles gold medal at the Olympic Games in London. She will be looking for her fourth US Open title as live streaming online coverage of the 2012 US Open begins Monday. Serena did however lose to Samantha Stosur in the US Open Final in 2011 after going in as the overwhelming favorite.
Watch the US Open online live to see if Serena has enough left in the tank to continue her incredible run in 2012.
The US Open draws only the best tennis players from around the world and if you’re a true tennis fan, you’ll want to be sure to watch live streaming coverage of the 2012 US Open for free online as soon as the players hit the court for the first round. Just visit FreeCast’s Live Streaming Coverage Guide and we’ll help get you started.
You can also watch the 2012 US Open live online for free with your mobile device if you don’t have a computer or a TV.
Men’s US Open Update – Tuesday, September 4: Andy Murray continues to impress after winning Olympic gold in London, defeating the hard-serving Milos Raonic (6-4, 6-4, 6-2) with finesse and efficiency on Sunday to advance to the US Open quarterfinals at Arthur Ashe Stadium. Novak Djokovic hardly broke a sweat in his second US Open match against Julien Benneteau (6-3, 6-2, 6-2) to advance to the fourth round. The reigning US Open champion will now face Stanislas Wawrinka on Tuesday as the men’s round of 16 streams live online.
Andy Roddick, who recently announced his retirement from the game of tennis following the 2012 US Open, is going up against 6-foot-6 Juan Martin Del Potro on Tuesday at 7pm ET and you can watch it live online with FreeCast.
Bob and Mike Bryan will play Julien Benneteau and Nicholas Mahut in the quarterfinals for men’s doubles after narrowly escaping a loss to Santiago Gonzalez and Scott Lipsky on Monday. The 2012 Olympic gold medalists are looking for their fourth US Open title.
Women’s US Open Update – Tuesday, September 4: No. 2-seed Agnieszka Radwanska lost to No. 20 Roberta Vinci on Monday and is now out of the 2012 US Open. Radwanska struggles with her serve and just didn’t have her best game and as a result, ended her 4-0 lifetime run against Vinci.
It didn’t even take Serena Williams an hour to cruise past Andrea Hlavackova and advance to the quarterfinals, winning 6-0, 6-0. Next, Williams will face Ana Ivanovic. Her sister Venus is officially out of the US Open after the two lost their doubles match to the fourth-seeded Maria Kirilenko and Nadia Petrova in the third round on Monday night.
On Tuesday, be sure to watch what should be great matchups between No. 1 Victoria Azarenka and the 2011 US Open singles champ, Samantha Stosur, followed by Maria Sharapova vs Marion Bartoli. Live streaming coverage of 2012 US Open tennis picks back up Tuesday at 11am ET when Azarenka and Stosur square off at Arthur Ashe Stadium.
Men’s US Open Update – Tuesday, August 28: Top seed Roger Federer  won his first-round match on Monday with relative ease as did Andy Murray, beating Alex Bogomolov in straight sets. Federer has lost to Djokovic in the US Open semifinals the past two years so it will be interesting to see if they will meet once again in 2012 considering the tear Roger’s been on. Djokovic will be going against Paolo Lorenzi in his first-round match on Tuesday at 7pm ET. You can watch this match live online with the help of FreeCast.
Murray’s looking to win his first major and if he does so at Arthur Ashe Stadium, he will become the first man ever to win a singles gold medal at the Olympics and a US Open title in the same year. John Isner and James Blake also won their respective first-round matches of the US Open on Monday.
Women’s US Open Update – Tuesday, August 28: Maria Sharapova overcame a stomachache to defeat Hungary’s Melinda Czink (6-2, 6-2) in the first round while defending US Open champion Samantha Stosur also made it through her first match, beating Petra Martic without hardly breaking a sweat (6-1, 6-1). Kim Clijsters, who is competing in her last US Open at the age of 29, took care of Victoria Duval in straight sets as she continues on the path toward her fourth US Open title. Australian Open champion Victoria Azarenka also won her first match ease.