(You can also watch 30 for 30 films on demand any time at FreeCast.) 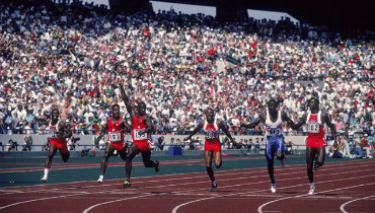 The second ESPN 30 for 30 film of the new season, titled ‘9.79’, will air Tuesday, October 9 at 8pm ET. And while ESPN will be showing 30 for 30’s ‘9.79 on television, fans of the hit documentary series can also watch 30 for 30: ‘9.79’ live online for free with FreeCast.
Just visit our Live Events page and find the link for the 30 for 30: ‘9.79’ live stream. Click on that link to start watching ESPN 30 for 30 live online, absolutely free.
The 1988 Olympic Games in Seoul featured the race of the century that soon after became the most controversial moment in Olympics history. In that race, Canada’s underdog Ben Johnson blew past the competition to set an incredible 100 meter world record of 9.79 seconds before having all of the Olympic glory stripped away from him just three days later due to a failed drug test.
To this day, there is a great deal of mystery surrounding the 1988 100 race, which also included American Olympic legend Carl Lewis. ESPN 30 for 30’s ‘9.79’ will take a close look at the 1988 Games in Seoul, featuring interviews from all eight athletes who competed in the highly-controversial 100 meter race. Watch 30 for 30: ‘9.79’ online live with FreeCast to gain a much better understanding of exactly what went down at the 1988 Olympics in Seoul.
‘9.79’ was directed by award-winning producer/director Daniel Gordon, who grew up as a big fan of professional sports, primarily soccer. In the 30 for 30 film, ‘9.79’ Gordon brings us interviews from Ben Johnson, Carl Lewis and the other six men from the 100m final at the Seoul Games as all of them tell their story from the 1988 race. Be sure to watch ‘9.79’ online for free Tuesday nights as each Olympic athlete provides their account of what happened.
It will be interesting to see what Johnson, Lewis and the other athletes have to say about the infamous 100m race, twenty years later. While Johnson returned to Canada disgraced after having his gold medal and world record stripped away, Lewis has remained a cultural icon and Olympic hero in the United States.
ESPN 30 for 30’s ‘9.79’ will closely examine the race and raise questions in regards to whether or not Johnson was the only one guilty of using performance-enhancing drugs at the time. Be sure to watch the ESPN 30 for 30 live online for free as soon as the documentary film begins streaming at 8pm ET.
Just remember to visit FreeCast’s Live Events page to find the 30 for 30: ‘9.79’ live stream link. Then, just click on that link to start watching the ‘9.79’ 30 for 30 film live online for free. If you don’t have a computer to watch the 30 for 30 documentary on, you can also watch the ‘9.79’ 30 for 30 live online for free through your tablet or mobile device.