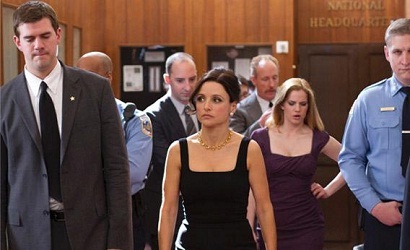 This Sunday (10pm EST), HBO subscribers around the country will be watching the pilot episode of ‘Veep’, a new comedy starring Julia Louis-Dreyfus (of ‘Seinfeld’ fame) as the vice president of the United States.
If you’re one of the millions without an HBO subscription, however, you may wonder how this applies to you. Well, luckily for you, the premium cable network is giving anyone with an internet connection the opportunity to watch the ‘Veep’ premiere episode online…for free.

As was the case with their ‘Girls’ pilot last week, HBO’s pilot episode of ‘Veep’ will be offered for free online via multiple free online viewing platforms, including HBO.com and Dailymotion (among others).  The episode will be available for free online from April 23 (the day after its HBO airdate) until May 21.

As you may have guessed, HBO is using this as a way to entice non-subscribers into joining the premium network bandwagon, and if the results of the freely available ‘Girls’ premiere is any indication, their plan should be pretty successful.
While only ‘Veep’s pilot episode will be available online for free during this time, those with an HBO subscription will have the ability to watch every episode of the series online through HBO GO, the streaming online video platform provided by the network.
Will you be watching the ‘Veep’ premiere? Will you be watching it online?  Let us know by leaving a comment.

Why spend more money then you have to? With our

FreeCast is announcing an agreement with Stingray,

It's Sunday so sit back and relax Get all your c

Never lose your place again. Save your best show

FreeCast and beIN SPORTS are announcing an agreeme

Bring your TV with you. Watch through all your favorite devices with SelectTV 💙

SelectTV gives you everything you wanted from TV - without the cable bill.

Don't believe us find out what customers are saying 💙

Sit back, relax and turn on your favorite show or movie with SelectTV 💙

Why spend more money then you have to?

With our content marketplace, you can find any Pay-Per-View movie or show you want with the cheapest options to buy it.

Find out more through SelectTV 💙