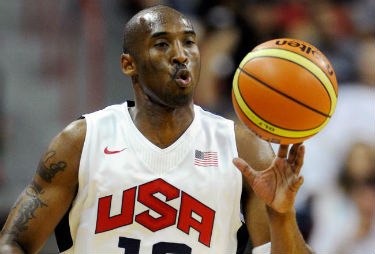 It’s no secret that when it comes to Olympic basketball, the US is downright dominant. That isn’t likely to change in the 2012 Olympic Games in London either, considering Team USA is undefeated in 2012 exhibition games both on the men’s and women’s side.
Watch 2012 Olympic Basketball live online for free beginning on Saturday, July 28 at 4am ET to see if another country has what it takes to dethrone Team USA.

Men’s Basketball Preview – Thursday, August 2: Team USA will likely dominate their way through their next match-up against Nigeria at 5:15pm ET, just as they did against Tunisia (110-63) in their previous game. Look for Kevin Love to continue playing a major role, as well as Kevin Durant, Kobe Bryant and Lebron James, who simply cannot be guarded. Olympic Men’s Basketball games will get going at 4am ET on Thursday and will stream live online. Look out for the usual solid performances from players like Pau Gasol (Spain), Tony Parker (France) and Leandro Barbosa (Brazil) in their respective games throughout the day.
Women’s Basketball Preview – Wednesday, August 1: Canada and France will play in the first game of the day at 4am ET, while Team USA and Turkey will face off in the final game on Wednesday at 5:15pm ET. Other good match-ups to watch in Olympic women’s basketball are Australia vs Brazil (9:30am ET) and Great Britain vs Russia at 11:45am ET.
Men’s Basketball Preview – Tuesday, July 31: Team USA easily got past a Tony Parker-led France team on Sunday, winning 98-71 in their tournament opener. Kevin Durant scored a team-high 22 points in his first Olympic game and Kevin Love added 14 points of his own. Team USA will now face Tunisia at 5:15pm ET on Tuesday, which should result in another easy win. You’ll also want to be sure to be sure to watch Spain vs Australia at 6:15am ET and France vs Argentina at 3pm ET. Argentina’s Manu Ginobili and Luis Scola are among the big names to watch, in addition to Brazil’s Leandro Barbosa, who leads his team against Great Britain at 11:45am ET and Spain’s Marc and Pau Gasol.
Women’s Basketball Preview – Monday, July 30: Olympic women’s preliminary basketball games are going on as we speak and the Team USA will will play in the final game of the day at 5:15pm ET against Angola. China defeated Croatia the first match-up this morning, while Turkey defeated the Czech Republic and and Australia was upset by France. Among the players still left to watch today are Team USA’s Candace Parker and Maya Moore, Great Britain’s Kim Butler and Canada’s Michelle Plouffe.
Men’s Preview: Team USA is expected to run through the competition and win Olympic gold for the second straight time and the twentieth time overall. Spain is expected to provide the biggest challenge for Team USA because they have a lot of size in Marc and Pau Gasol and Serge Ibaka. Argentina and Brazil could also reach the podium, but their chances of knocking off a US team that includes Lebron James, Kobe Bryant and Kevin Durant appear to be slim to none.
Women’s Preview: The US Olympic Women’s Basketball Team, which includes star WNBA players like Candace Parker, Sue Bird and Maya Moore, will be looking for their fifth straight Olympic gold medal. Australia, led by three-time WNBA MVP Lauren Jackson, will likely give the US women’s team their biggest test, as they have won silver medals at the last three Olympics.