Live streaming coverage of the 2012 Ryder Cup begins Friday at 8am ET. 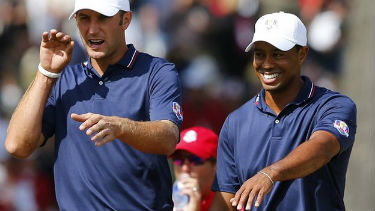 There’s plenty more golf heading your way with the 2012 Ryder Cup beginning on Friday, September 28. The Ryder Cup is the one professional golf event that pins the US against Europe and it only takes place once every two years.
The best European and American golfers will start going at it on Friday at 8am ET and with the help of FreeCast, you’ll be able to watch the 2012 Ryder Cup live online, absolutely free. To watch the Ryder Cup live online for free, just click on the Ryder Cup live stream link on our Live Events page.
The location for the Ryder Cup alternates between US and European golf courses. This year, it will be held at Medinah Country Club in Illinois, giving the US a slight home-course advantage. Watch the Ryder Cup online live with FreeCast to see if the crowd can get in the heads of some of the European players.
Three formats are used in the Ryder Cup series — foursomes, fourball and singles. On Friday and Saturday morning, foursomes play will get under way as two US players are paired up against two European players. In this format, players consistently alternate shots on every hole for a combined score. In fourball (Friday and Saturday afternoon), each golfer plays his own ball and the pair counts the best of the two scores for each hole. Be sure to watch the Ryder Cup live stream online for free to see which pair will exceed the rest.
Finally, the Ryder Cup wraps up with singles play on Sunday, in which one European and one American are pinned against one another. The best score on each hole wins the hole. It could come down to a dramatic finish on Sunday so golf fans everywhere will want to be sure to watch the 2012 Ryder Cup live online for free all-weekend long.
Among the golfers representing the US at the Ryder Cup in Illinois are Tiger Woods, Phil Mickelson, Dustin Johnson, Bubba Watson, Jim Furyk and Brandt Snedeker. The captain for the US is Davis Love.
On the European side, watch out for PGA Tour Player of the Year favorite Rory McIlroy, Justin Rose, Luke Donald, Sergio Garcia, Graeme McDowell and Ian Poulter. Maria Olazabal will serve as the captain for Europe. Be sure to watch the Ryder Cup live online as defending champions Europe try to tune out the US crowd at Medinah Country Club.
Remember, FreeCast is your destination for free live streaming coverage of the 2012 Ryder Cup as you will be able to watch the major golf event live online from September 28 – 30. Even if you don’t have a computer, you can still watch the Ryder Cup online live through your tablet or mobile device.