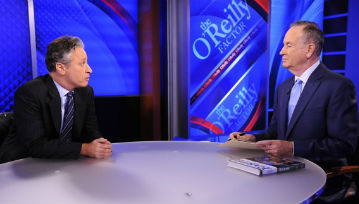 The highly-anticipated political debate between The Daily Show’s Jon Stewart and the The O’Reilly Factor‘s Bill O’Reilly, dubbed ‘The Rumble in the Air-Conditioned Auditorium’ will take place on Saturday night at George Washington University in Washington D.C.
To watch Jon Stewart vs Bill O’Reilly debate live online, just visit FreeCast’s Live Events page. We’ll direct you to live streaming coverage of Stewart vs O’Reilly online after paying a just a $4.95 fee. Once you pay that fee, you’ll be able to start watching ‘’The Rumble 2012’ live online Saturday at 8pm ET.
‘The Rumble 2012’ will consist of an hour-long political debate followed by 30 minutes of questions from the audience at George Washington University. It will be moderated former Fox News Live host E.D. Hill. Watch the Stewart vs O’Reilly debate live online to see which TV show host presents more compelling arguments.
Stewart has long poked fun at O’Reilly and Fox News and it will be interesting to see how serious the comedian takes this debate. O’Reilly, a registered independent, has been one of the biggest critics of the Obama administration since before the current president even took office. Watch O’Reilly vs Stewart live online to see if the Daily Show host shows a different side than what people are used to.
Despite their vastly different political views, O’Reilly and Stewart have a great amount of respect for one another. Stewart has appeared on ‘The O’Reilly Factor’ on numerous occasions and O’Reilly has returned the favor as well, even appearing on Comedy Central’s ‘The Daily Show’ on Thursday, just two days before ‘The Rumble 2012’, to promote his new book ‘Killing Kennedy’. Be sure to watch the O’Reilly vs Stewart debate live online as these two TV personalities go at it head to head.
Half of the net profits from the O’Reilly vs Stewart debate will go to charities selected by each of the participants. It was O’Reilly who first approached Stewart with the idea for ‘The Rumble 2012’ and the event immediately gained wide-spread media coverage as soon as Stewart agreed.
You won’t want to miss out on watching the Stewart vs O’Reilly debate live online as both popular TV show hosts will go over some of the most popular political topics surrounding the 2012 presidential election between Barack Obama and Mitt Romney.
To watch ‘The Rumble 2012’ live online just visit FreeCast and head to our Live Events page. There, you’ll see a link for ‘The Rumble 2012’ live stream which you can click on to begin watching the Stewart vs O’Reilly debate online live.