Click Here to View the Original Press Release on PRNewswire 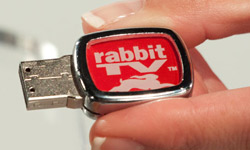 ORLANDO, Fla., April 12, 2013 /PRNewswire/ It’s no secret that Internet and wireless bandwidth will inevitably replace cable’s outdated and costly infrastructure when it comes to the delivery of digital programming (TV shows, movies, and events). Widespread use of computers, smartphones, tablets, smart TVs, and set-top boxes is driving the demand for universal access to all types of programming over the Internet.
Today’s active consumers often find it difficult to watch shows during scheduled time-slots, and are resistant to paying over $100 a month for countless channels they don’t even watch. Many have stopped paying for cable and satellite TV services altogether and instead are watching shows and movies over the internet, prompting Nielsen company to start labeling people in this group ‘Zero TV’ households.
This Zero TV segment is becoming increasingly significant – the number of new sign-ups to traditional TV service fell to almost zero in 2012, when cable, satellite and telecoms providers collected a mere 46,000 new video customers combined, according to research firm SNL Kagan. Meanwhile, according to a 2012 Nielsen report, the U.S. had more than 5 million Zero TV households in 2013.
Capitalizing on this growing market, two new aggregators recently exploded onto the scene approaching the situation from two very different directions.
Aereo, which is drawing media attention with its controversial delivery of local networks such as ABC, CBS, NBC, Fox and others over the web, faces legal pushback from the same major network providers whose content they’re redistributing without revenue considerations.
Rabbit TV, a popular and consumer-friendly electronic media guide service currently flying off major retailer shelves nationwide, gives its subscribers point-and-click access to a digital library spanning over 50 years of popular freely available programming from thousands of global online sources, including these major network’s sites. This results in elevated ad revenue for the major networks, generated by visiting Rabbit TV subscribers.
A collaboration between FreeCast and ‘AsSeenOnTV’ giants Telebrands, Rabbit TV’s ‘eMedia Guide’ also introduces its rapidly growing audience to the concept of ‘a-la-carte TV’, whereby users can purchase not only pay-per-view movies and events, but entire channels and standalone TV series from major networks, delivering an additional direct positive revenue impact to participating networks.
FreeCast acknowledges that this new form of content aggregation, coupled with inexpensive and easy-to-use video production tools, will also rocketshot their own online distribution network with original targeted channels created by interest-specific groups, covering topics ranging from local youth sports and hobbyists to outdoor cooking and new fashion, to name a few.
William Mobley, President of Freecast, explains “Consumers are making a choice to leave cable in big numbers in lieu of Internet programming options. For only $10 a year, Rabbit TV’s massive on-demand library will do for the Internet what TV Guide did for television over the last 50 years by guiding consumers to free on-demand programming and providing an environment to buy or rent movies, TV shows, series, or entire channels online on an a la carte basis.”
“While Aereo is flying in the face of the major networks by monetizing their free over-the-air content, it’s only a matter of time before all networks and content producers realize the benefits of selling directly to consumers through online services like Rabbit TV, who are already aggregating and educating thousands of new subscribers daily,” says Mobley.

I bought 4 and gave em all to family members they love it count on me to pass the word, Go Rabbit Tv!!!!!