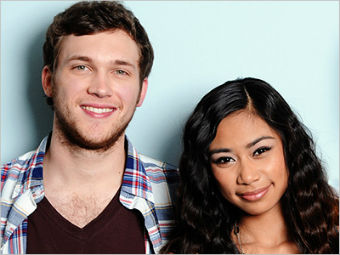 While last night’s ‘American Idol’ finale was designed to keep you on the edge of your seat for over an hour and a half, this blog is not. We’ll just get straight to the point and announce the victor: After 132 million votes being cast, the winner of the 11th incarnation of ‘American Idol’ is… Phillip Phillips!
While he wasn’t this editor’s favorite finalist, there’s no doubt that P-squared (probably) has what it takes to make it in the music industry. Sure, his voice isn’t the greatest, but it’s unique; he doesn’t dominate the stage, but the ladies love him; and he can even write his own songs (though it’s arguable how important this is for an American Idol winner…).
One could certainly argue that Phillips’ competitor Jessica Sanchez was the more talented of the two, but ‘American Idol’ is not as much a talent competition as it is a popularity contest, and Phillip was undoubtedly the most popular among most fans of the show. Of course that’s not to say Phillips is without talent.
There’s been a trend of ‘the young guy with the guitar’ winning on ‘Idol’ in recent seasons, but Phillips did a great job of differentiating himself from the crowd. Unlike most of the contestants, he established his identity early on and stuck to it, ignoring the producers’ attempts to give him a vocal and stylistic makeover. This confidence and distinctive style should help him stand out as a professional artist, probably moreso than most of the recent ‘Idol’ winners.
In the end, only time will tell if Phillips’ popularity among ‘American Idol’ fans will translate into the competitive music world, but with his unique style and built-in fan base, he definitely has a fighting chance.
Do you think the right contestant won this year’s ‘Idol’, or should Jessica have come out on top? Let us know what you think by leaving a comment below.
Didn’t catch the finale last night?  Watch highlights from the episode here.