Log-in or Register to Watch the Full Finale Episode Online for Free! 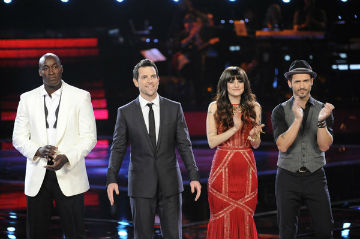 After a long season of drama, excitement, and heartbreak, the Season 2 winner of ‘The Voice’ has finally been crowned, and the winner is…Jermaine Paul!
Following some stellar performances in the past week, the former back-up singer for Alicia Keys was the last man standing in last night’s finale, beating out the three other finalists. Juliet Simms (Team Cee Lo) took the number two spot, with Tony Lucca (Team Adam) and Chris Mann (Team Christina) coming in third and fourth respectively.
Upon hearing his name announced by host Carson Daly, Jermaine proceeded to hug just about everyone he could – his family, his friends, the other contestants, and the judges – before returning to the stage for his final performance on ‘The Voice’ – R. Kelly’s ‘I Believe I can Fly’, an encore of his Monday performance.
In addition to the excitement of Jermaine winning, the episode also included plenty of material to keep viewers entertained, including the first-ever performance of Justin Bieber’s ‘Boyfriends’, some NBC cross-over sketches with ‘SNL’ and ‘Parks & Rec’, and a special surprise for each of the finalists – a new Kia.
Do you think Jermaine deserved the #1 spot?  Let us know what you think by leaving a comment below.