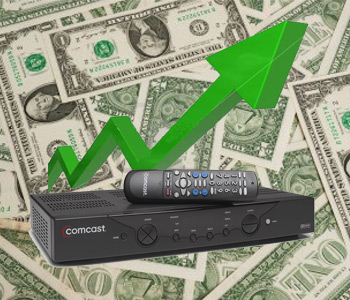 As a cable subscriber, you know that you need at least one cable box to access all your favorite programming, but a recent change in FCC policies may require that you rent or buy even more cable boxes to access even the most basic services.
Currently, cable systems don’t scramble what’s called “basic tier” services (broadcast stations, government, educational and public channels) – which means you can buy basic service and simply plug the cable into a digital set to watch these channels without a set-top box.
Since 1994, the encryption of these basic channels by cable companies has been prohibited by the FCC, but this October the commission voted to finally allow it – beginning Dec 10.

Cable companies and the FCC cited a number of reasons for allowing broadcast encryption.
First of all, by having the ability to scramble everything, cable companies can “reduce theft” (keep people from watching channels they don’t pay for). Secondly, with the new system, cable companies will be able to activate and terminate service remotely, which means they won’t have to send out a technician everytime a customer wants to change their plan.
These sounds like some pretty nice benefits – more technicians available for the more difficult installations, no more interrupting your schedule to wait for the cable guy – but the cable companies avoid touching on the effect these changes will have on many consumers.

Many American households with cable service have a number of “secondary” TV sets – in the bedroom, in the kitchen, etc. – that need only be plugged into the wall to get broadcast channels like ABC, NBC, Fox, and CBS. With these newest changes, these consumers would now be required to buy a separate cable box for each set in their house to gain access to even these basic channels.
Luckily, the FCC is requiring cable companies to give two free converters to households with only basic service (for two years), as well as one free box to everyone else for one year, after which the cable companies would be able to sell or rent the boxes to customers.
However, this FCC ruling mentions nothing about the boxes being HD, which probably means cable subscribers will have to fork out an extra $10 a month per box to access basic HD channels.
For basic service subscribers, it will make more sense to just buy an HD antenna, which doesn’t require any kind of monthly subscriptions but still provides you with the same broadcast channels in HD.

What This Means for The Future of Cable

For the last decade or so, cable companies have been trying to make up for revenue losses due to:

They close this revenue gap by raising prices on subscribers (an average of 5% increase each year). This constant hiking of prices is driving more and more cable subscribers to ditch cable for cheaper alternatives (“cut the cord”), which in turn causes cable companies to lose more money, which they have to make up for by nickel-and-diming their loyal customers.
It’s a vicious cycle.
It seems apparent that something’s gotta give – the way the general population consumes television needs to change. We already see small pockets of consumers finding realistic alternatives, but until there’s a simple, comprehensive solution available to the general population, the light at the end of the tunnel is still a long way away. But as Linda Sherry of Consumer Action puts it, “People have to ask themselves if cable TV is something they want and can afford, because it’s going to continue to go up in price.”
While this recent change will come with some benefits for consumers on one hand, on the other hand it’s simply another way for cable companies to squeeze another few dollars out of their subscribers. If nothing else, how cable companies make this transition will show consumers whether their cable providers are really interested in providing quality customer service, or if they’re only interested in their bottom line.